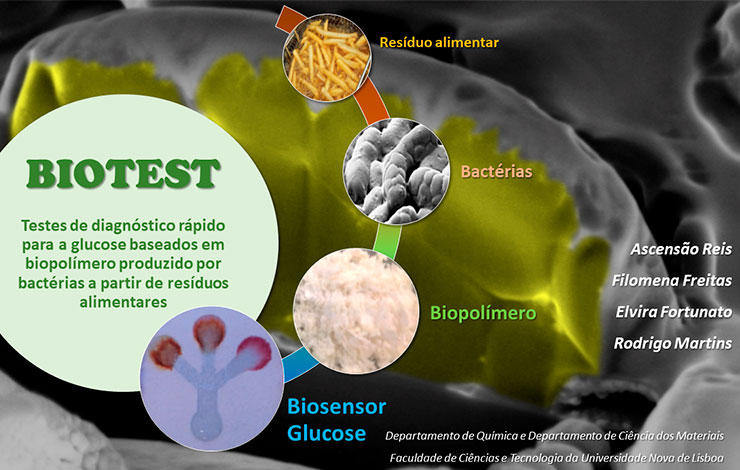 The project BIOTESTE - Rapid diagnostic tests based on biopolymer produced by bacteria from food waste (Professor Mª Ascenção Reis and Dr. Filomena Freitas (FCT NOVA Chemistry Department) and Professors Elvira Fortunato and Rodrigo Martins ( Department of Materials Science)) received an Honorable Mention at the 10th edition of the Green Project Awards, whose delivery ceremony of awards took place on January 12 at the Customs Center of Oporto.

This project consists of the development of a rapid and innovative diagnostic test for diabetes, composed of paper and a biodegradable biopolymer, produced by bacteria from food waste. This test has a fast and reliable response, allowing a timely detection of diabetes, preventing its worsening and reducing the deaths caused by this disease. Being a very cheap diagnostic test, it can be adopted by poor populations, facilitating access to this diagnostic medium.

In this 10th edition of the Green Project Awards (GPA), among the 150  received applications there were two FCT NOVA projects, both belonging to the "Research and Development" category: the BIOTESTE project - rapid biopolymer-based diagnostic tests produced by (Professor Mª Ascenção Reis and Dr. Filomena Freitas (DQ) and Professors Elvira Fortunato and Rodrigo Martins (DCM)) and of the LAQV - REQUIMTE, the PURECleanMIP project.

The Green Project Awards, a multisectoral platform that promotes good practices and public discussion for sustainability, distinguished the national entities that stood out for their contribution to the Sustainable Development of Portugal. Over the last ten years, the Green Project Awards have distinguished more than 120 projects in Portugal, out of a total of more than 1,400 applications received. In 2018, it continues to promote the sharing of best practices that contribute to fostering entrepreneurship, innovation and the green economy.