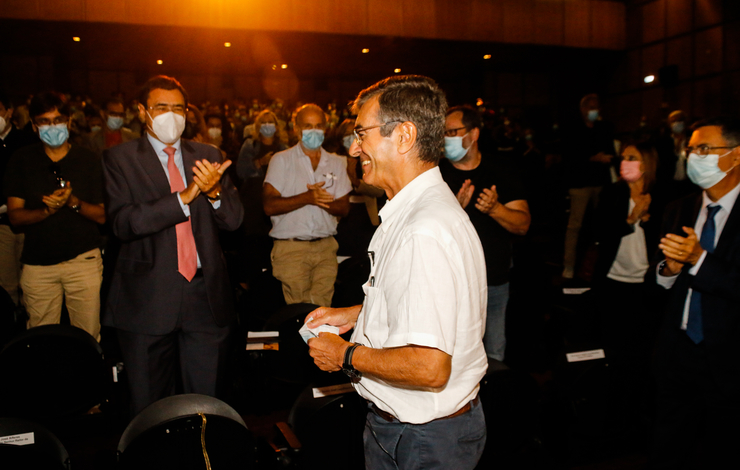 José Legatheaux Martins, Full Professor at the Department of Computer Science (DCS) of the NOVA School of Science and Technology (FCT NOVA) and NOVA LINCS researcher, gave his jubilation lesson on October 20, in the Grande Auditorium of the Caparica Campus, the first jubilation lesson of the DCS.

In front of an auditorium full of colleagues, professors and researchers from various institutions and students, who wanted to pay homage to the “father” of the internet in Portugal, Professor Legatheaux Martins delivered a lesson entitled “Internet: impact, virtues and limitations of a network architecture with more than 40 years.”

The session was opened with the customary greetings and speeches, first by the President of the DCS, João Leite, followed by interventions by the Dean of FCT NOVA, Virgílio Cruz Machado and the Coordinator of the Computer Systems Architecture Section of the DCS, Nuno Preguiça. Everyone mentioned his extensive and successful career, both as a pedagogue and researcher, his contribution to the development of DCS and FCT NOVA and his vast contribution to Society.

In this lesson, which captured the attention and interest of the entire auditorium, Professor Legatheaux Martins analyzed the current situation of the internet and how it got here, looking at the technological and architectural foundations that gave rise to it 40 years ago, examining its evolution network facing the challenges of time.

Before the closing of the session, which culminated in a enthusiastic ovation, they were handed over to Professor Legatheaux Martins offerings by DCS and FCT NOVA, and a video was presented with testimonies from colleagues and friends who made reference to its legacy and the important role the Professor played in the implementation of the internet in Portugal and society in general.

José Legatheaux Martins is Full Professor of Distributed Computer Systems and Computer Networks at the Department of Computer Science (DCS) at NOVA School of Science and Technology and researcher at NOVA LINCS. From 2007 to 2011 he was president of DCS and vice president of FCT NOVA for the Scientific Council. He was chairman of the board of the Portuguese Chapter of the Internet Society from 2017 to 2021, and is a member of the ACM and a senior member of the IEEE.

He graduated in Computer Engineering in 1979. From 1983 to 1987 he was a researcher at INRIA in France, in the central office in Paris, where he worked on the development of the beginnings of distributed operating systems. At the end of 1986, he obtained his PhD in Distributed Systems from the University of Rennes in France. From 1988 to 1992 he was a professor at the University of Lisbon and, since then, at FCT NOVA. His previous research was related to distributed operating systems, distributed data replication, mobile systems and CSCW systems. Currently, his main research interests are related to the routing and management of computer networks and the future evolution of the Internet.

From 1990 to 1994 he headed the national project that established the Portuguese branch of the Internet and led the PUUG – Portuguese Group of Users of Unix Systems and the Portuguese branch of EUnet, non-profit organizations that promoted Open Systems, the TCP/IP network and the adoption of the Internet. In 1996, he was the key founder of a Portuguese ISP that was acquired in 2000 by Qwest Communications Company. From 2000 to 2004 he worked as a consultant and non-executive member of the management board of Companhia KPNQwest Portugal.