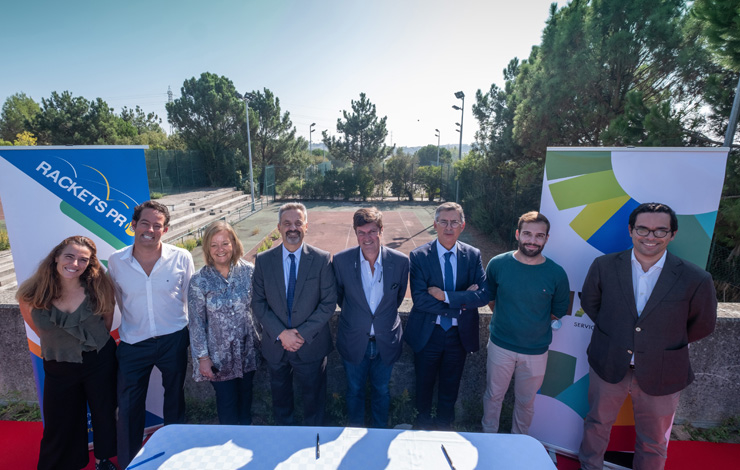 NOVA signed a protocol with RacketsPro, the national leader in the management of racket clubs, for the dynamization of a sports space on the NOVA School of Science and Technology Campus, where a sports club will be created with special advantages for the entire NOVA student community and that will also be open to the surrounding local community. This new Sports Club, with an estimated investment of around 870,000 euros, will be fully operational in February, with construction work scheduled to begin in October.

The protocol is part of the university's commitment to sports as a strategic axis of life on the NOVA campuses, and this Sports Club will be the first implementation of this transversal commitment. The partnership established with RacketsPro will make it possible to renew the current sports structures of the Monte da Caparica University Campus, thus creating better conditions for the practice of sports such as Volley, Basket or Handball and even for the attraction of international competitions. It will also make it possible to generate greater dynamics in the university community in sports such as Padel, Tennis, Climbing or CrossFit. As an example, this sports club will feature the largest complex of covered paddle tennis courts in Greater Lisbon.

Sport is currently a strong area of ​​NOVA, especially in the area of ​​competition, in which its students are the most outstanding and medaled in the Portuguese university universe. In the last 5 years, NOVA's sporting representation in university championships has varied between 35 and 47 sports.

In accordance with its strategic plan until 2030, NOVA intends to turn its university campuses into spaces for sharing knowledge, open and functional, but also pleasant, where people - inside and outside the NOVA community - can interact with each other and participate in activities such as culture or sports, making university life more complete and enriching and substantially raising the quality of life on the campuses.

In the specific area of ​​sport, NOVA intends to create conditions that facilitate sports on all its Campi (namely Campolide, Monte da Caparica and Carcavelos), supporting student athletes and promoting physical activity, leisure and a healthy lifestyle.