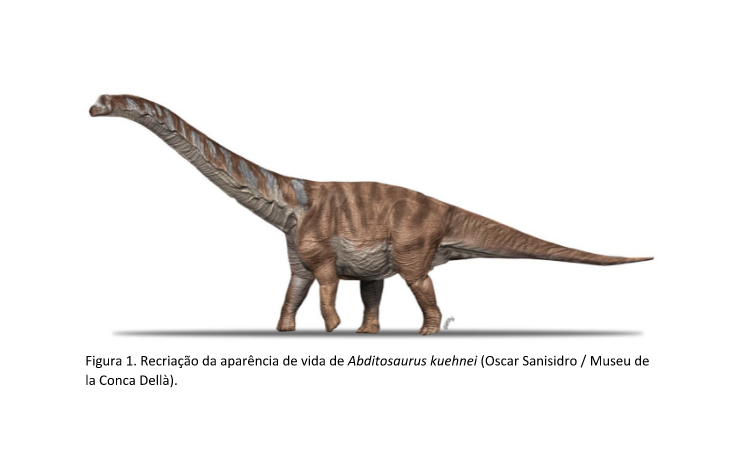 Researchers at NOVA School of Science and Technology contributed to the description of a new species of titanosaur dinosaur Abditosaurus kuehnei from the remains excavated in the Orcau-1 site, in the south of the Pyrenees (Catalonia, Spain).

The 70.5-million-year-old semi-articulated skeleton is the most complete specimen of this herbivorous group of dinosaurs discovered so far in Europe. In addition, Abditosaurus is the largest species of titanosaur discovered on the Ibero-Armorica island — an ancient region that today comprises the Iberian Peninsula and southern France — representing a senescent individual estimated at 17.5 meters in length with a body mass of 14 kilograms. .

It is precisely the size of this giant one of the most surprising facts to researchers. "Titanosaurs from the Upper Cretaceous of Europe tend to be small or medium-sized due to their evolution in insular conditions”, explained Bernat Vila, paleontologist at the ICP leading the research. During the Upper Cretaceous (between 83 and 66 million years ago), Europe was a large archipelago made up of dozens of islands. The species that evolved there tend to be relatively small, or even dwarves compared to their relatives living in large landmasses, due primarily to the limitation of food resources in islands. “It is a recurring phenomenon in the history of life on Earth, we have several examples worldwide in the fossil record of this evolutionary trend. That’s why we were astonished by the large dimensions of this specimen”, adds Vila.

The fieldwork conducted over several decades unearthed 53 skeletal elements of the specimen. These include several teeth, vertebrae, ribs, and limbs, scapular and pelvic bones, as well as a semiarticulated fragment of the neck formed by 12 cervical vertebrae.

In their article published in Nature Ecology & Evolution, researchers conclude that Abditosaurus belongs to a group of saltasaurine titanosaurs from South America and Africa, different from the rest of European titanosaurs that are characterized by a smaller size. These authors hypothesize that the Abditosaurus lineage reached the Ibero-Armorican island taking advantage of a global drop in sea level that reactivated ancient migration routes between Africa and Europe.

The new finding is a major advance in the understanding of the evolution of sauropod dinosaurs at the end of the Cretaceous and brings a new perspective to the phylogenetic and paleobiogeographic puzzle of sauropods in the last 15 million years before their extinction.

The study is led by researchers from the Institut Català de Paleontology Miquel Crusafont and the Conca Dellà Museum (Catalunya, Spain), with the contribution of NOVA School of Science and Technology, Museum of Lourinhã, Autonomous University of Barcelona (UAB) and University of Zaragoza (UNIZAR).